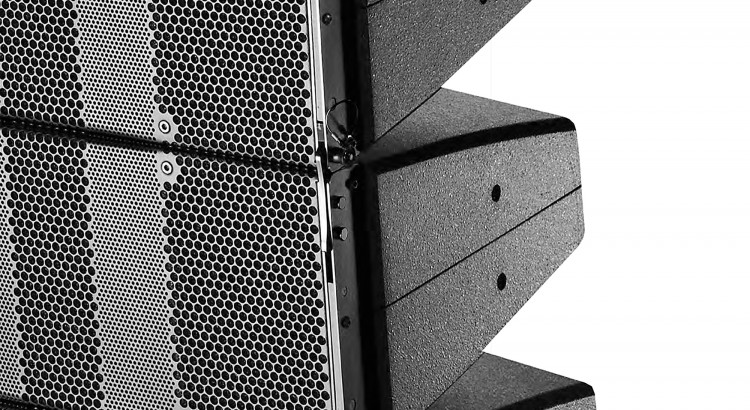 Most speaker systems will use a simple “Stereo” system. A speaker on the left, and on the right of the performance area. This has the effect of making the sound come from between the two sources. Sounds like a good plan? Well, only when you are the same distance from each speaker. If you are off to the side, sound will arrive at different times from each speaker. This coupled with being closer to one making it sound louder means the stereo effect is lost on most positions apart from directly between them. Sometimes the fact that there is one on each side is for coverage purposes. If you have a stereo audio track with instruments or voices panned hard left and right, you may not hear the intended track if you are not in the firing line of both speakers.

On larger stages, these speaker positions be quite far apart, leaving a dead spot towards the middle of the listening area. This is where “front fills” or a “center cluster” might be used to effectively fill in the gap. These will often be driven from a different signal to the main left and right speakers. Some mixing desks have a LCR (Left, Center, Right) panning setup to enable signals to be spread across the whole system. However, most of the time they are simply driven from a sum of the Left and Right signal, or a completely different mix to the LR system; perhaps just including vocal microphones. 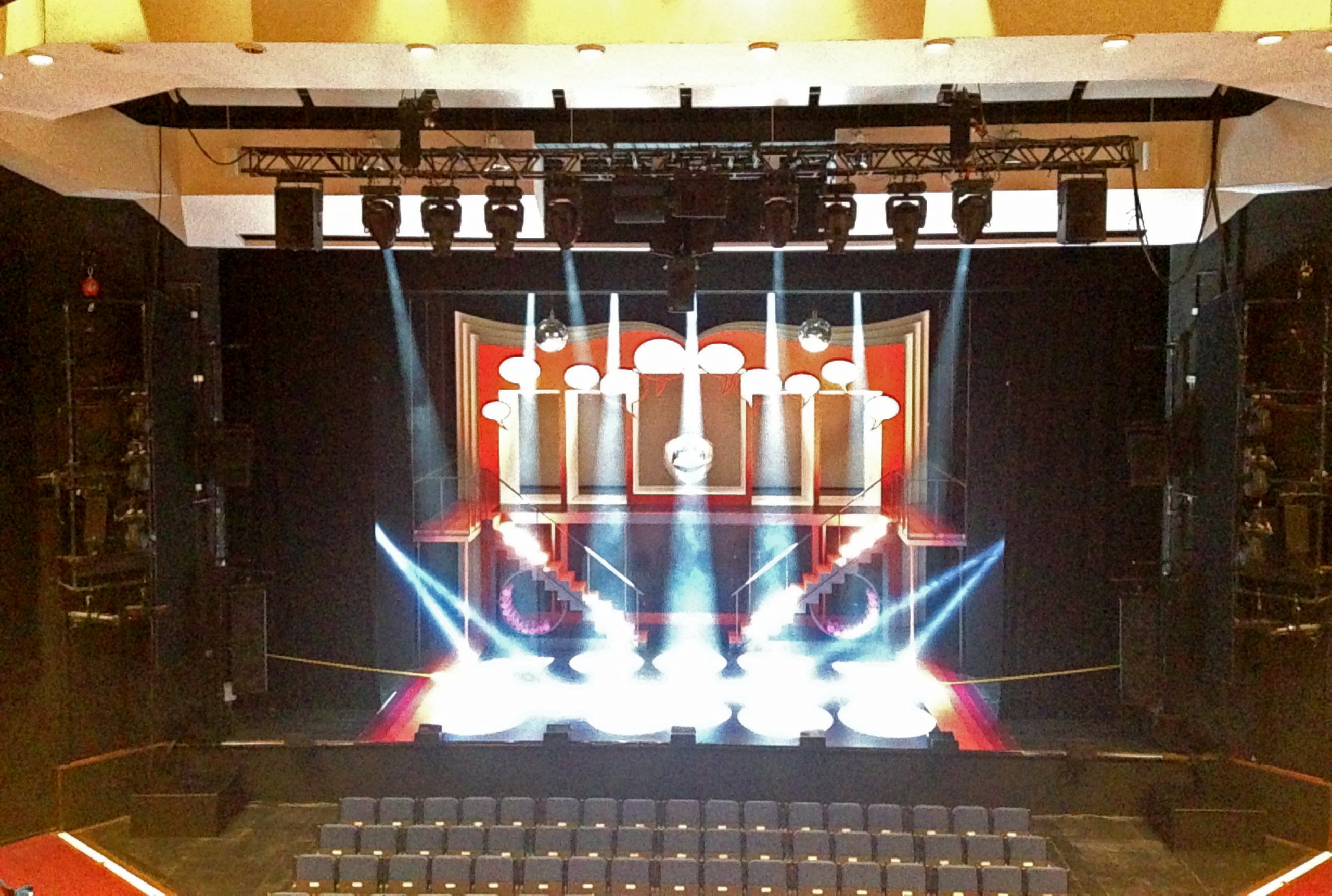 Speaking in a purely theoretical sense for a minute, no speaker replicates a true point source. Imagine a point in space. Now imagine sound radiating out from that point in all directions. You would see sound waves like a sphere radiating out from the point. Now imagine a speaker. You will generally have a cone to reproduce lower frequencies, and a horn or tweeter to reproduce the higher frequencies. It’s physically impossible for the sound to come from the same point in space as there are two drivers. Some configurations get close, but technically it’s not possible. Some coaxial drivers that mount a high frequency element in the middle of a lower frequency cone are good at achieving this.

Another term sometimes used is a “point source array”, or “point source cluster”. It is a collection of point sources that are aligned together to create an array of sources. If done correctly, the sources will couple together and create a single wavefront – in effect creating a bigger sound source. However, back in the real world, the sources never couple exactly. Some systems are better than others, and you tend to get what you pay for.

What actually happens with line arrays is lots of point sources are designed to work together to create a cylindrical wave. In the near-field (close to the array) there will always be interference between boxes. But as you move away, they all couple to create a single wavefront. The angles of the boxes that make up the array can be adjusted to change the shape of the sound wave to change the coverage pattern of the array. Some manufacturers go further than this and use DSP (Digital Signal Processing) to adjust the sound coming out of each box in the array to further refine and shape the sound wave and therefore the coverage pattern. 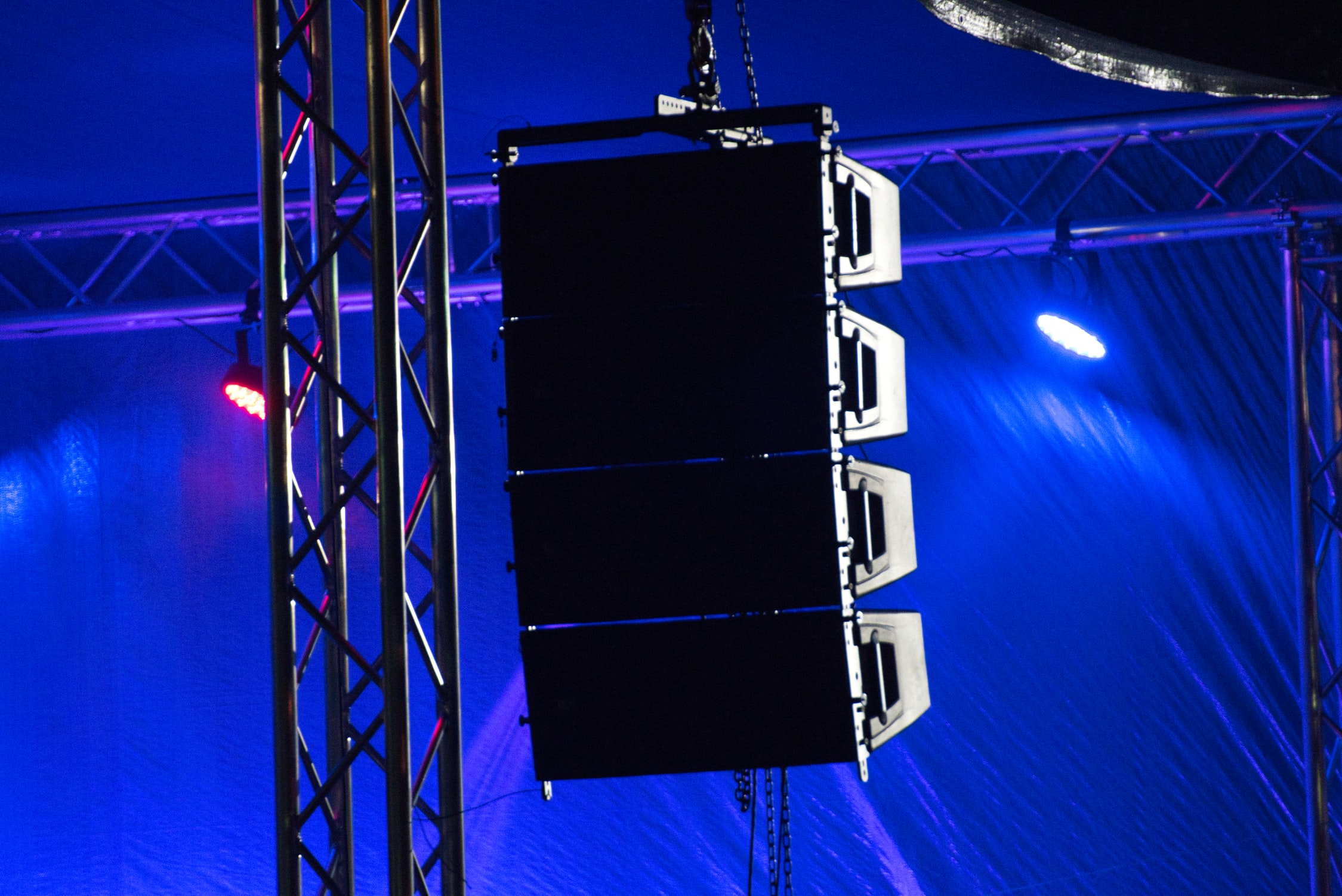 Walk away from your ringing phone and it will get quieter. As you move away from a point source speaker, the volume will drop. This volume difference can be measured. Sound is generally measured in Decibels. Decibels is a unit of measurement, similar to Voltage or Millimetres.  A Decibel can be represented by its abbreviation of dB. If we are 1M away from a point source speaker and we measure the volume with a Decibel Meter, we might get a reading of, say 70dB. If we move to 2 Meters away, we will loose 6dB of volume – measuring 64dB. By doubling the distance from the speaker, we have reduced the volume by 6dB. If we double the distance again to 4M away, we will reduce the volume a further 6dB to 58dB.

Why is this important to know? Because a Line Array behaves differently. When you double the distance from a line source speaker, you only loose 3dB. This is often why large scale events use line arrays – they enable you to cover large distances and only loose 3dB for each doubling of distance rather than 6dB.

A line array generally has a very tight dispersion pattern. This enables you to effectively target where you want the sound to go in a room. There are some array systems that enable lower frequency pattern control due to clever cabinet design and multiple drivers to cancel out unwanted sound coming out the back of a box.
A point source speaker will have a set dispersion pattern, typically around 90degrees wide, and 40 degrees high. It tends to be the high frequency driver that defines these angles. The lower frequency element of a point source speaker doesn’t tend to be as directional. This could mean you are putting energy into parts of a room you don’t want to, and causing unwanted reflections.

What should I use?

It really depends upon the situation. Both have their advantages and ideal uses. Speak to hire companies, speak to manufacturers and arrange demos of boxes. See what you like the sound of, and what will fit within your particular needs.