Sound is vibration through a medium such as air or water. This vibration causes a mechanical pressure and displacement of particles, the frequency of which affects the pitch and the amplitude of which affects the volume. A good analogy for sound is dropping rocks into a pond. A big rock makes large ripples (waves) and travels further. The smaller rock makes smaller ripples (waves) and doesn’t travel as far. Sound travels at 330mps.

The more frequent the peaks and troughs of this vibration, the higher the pitch produced. Pitch is most often measured in Hz (Hertz). Hz represents the amount of times the sound wave completes a full cycle in 1 second.

The perfect human ear can hear between 20Hz and 20kHz, however the optimum range for human hearing (at which the lowest db is needed for the sound to be heard) is between 1kHz and 4kHz.

In the image below the grey vertical bars represent 1 millisecond. As you can see this sound wave completes a full cycle within this time scale. This means that there will be 1000 of these full cycles every second, meaning the sound produced will be 1000Hz or 1kHz.

Amplitude represents the strength of a sound wave. This is heard by the human ear as volume. The human ear is incredibly sensitive to sound and can detect such a wide range of volumes, we cannot use a standard scale to measure it. So we use a logarithmic scale which is known as Decibels. This significantly increases the range of volume we can refer to, whilst keeping the numbers involved low enough to be manageable. For more on Decibels see our other article ‘Decibels, Mic and Line Levels’.

Amplitude is represented on a wave by their height as seen below. 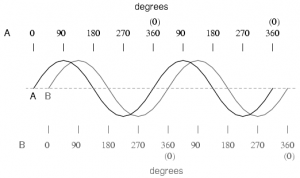 The result of similar sound waves being ‘out of phase’ with each other is varying amounts of ‘phase cancelation’. Phase cancelation at its most extreme when the phase is at 180°. Sound wave B would then completely mirror sound wave A causing no pressure change. The image below shows two of the same sound waves as dotted lines and the resulting audible sound wave as a solid line when these are played at varying degrees of phase. 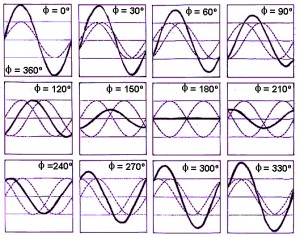 Phase cancelation is used a significant amount to sound engineers advantages. It can help to balance a sound system using multiple speakers coming from multiple different sources in order to achieve a uniform amplitude across the audience. In some situations sub speakers are used behind existing subs at loud outdoor concerts in order to intentionally cancel out sub frequencies spilling into residential areas or to other stages at festivals.

The most common phase cancelation you are likely to hear is when the left and right of a stereo track from a iPod or CD are combined to create a mono sound and you will get all sorts of strange cancelation effects with all of the instruments which are not panned on the track.

Below is a track showing the effects of phase on real instruments. Every two bars an identical track is overlaid on the existing one at approximately 180° phase.

I hope this ‘What is Sound?’ article has provided you with an understanding of the fundamentals of sound. For any more information or any specific questions please get in touch.